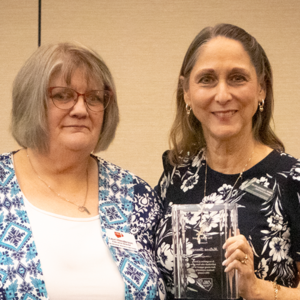 This was the third year for the organization to give the ROSE Award, which stands for Recognition of Service Excellence. This award recognizes two women in business, two women in ministry, and a pastor's wife, along with a partner, volunteer, and alumni of the year for the ministry.

“The committee felt what Melissa — along with the nurses — did this past year in dealing with making sure the children were kept healthy and safe with dealing with COVID-19 was worthy of the award,” said ECWJC Executive Director Lauri Henderson.

Bousquet served as a stay-at-home mom for 22 years before she became a campus nurse at Felty Elementary. She served as the district’s nurse coordinator for four years and is now the Director of Health and Wellness.

“In a time when so many in the community were demonstrating sacrificial service, we were very honored to be chosen for this award,” Bousquet said. “The WISD campus nurses demonstrated skilled, professional nursing care under very difficult and uncertain circumstances. I have no doubt that each one has achieved an even higher level of proficiency due to the experience.”

Bousquet was born and raised in Fort Worth and graduated from Texas Tech University with a bachelor’s degree in biology. She also earned a degree in nursing from the University of Texas.

She has been married to her husband John Bousquet for 37 years. They have six children and welcomed their sixth grandchild in May. Bousquet has lived in Waxahachie for 34 years and attends First Baptist Church. She also proudly serves on the board of directors of Court Appointed Special Advocates (CASA) as vice-president.